The modern dairy cow is a top athlete: she performs at the highest level

Our modern dairy cow passes through a cycle that contains risky phases.  The transition period, often described as the last thirty days of gestation plus the first thirty days after calving – is such a hazardous period of time. During the transition from dry period to lactation, the cow is trapped in a negative energy balance (NEB). This means that her feed intake is insufficient to maintain a high milk production, resulting in body fat being mobilized. Figure 1 depicts a schematic overview of this process. The crucial phase starts shortly before calving, and it is clear that the energy requirement in the first stage of lactation is higher than the energy intake. 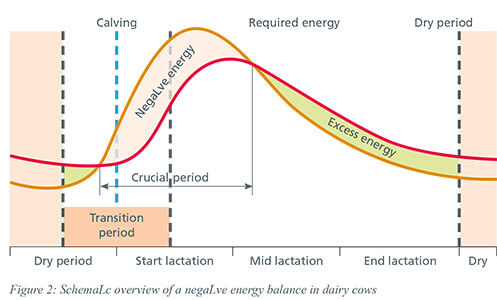 After calving, large quantities of milk are produced, while the feed intake often lags behind. This means that the energy intake of the cow is not enough to maintain her milk production. As a consequence, the body weight of the cow decreases: the fat reserves in the body are mobilized to provide the required energy. In this process, ketone bodies (aceto acetate, acetone, beta-hydroxy butyric acid) are formed. If the concentration of ketones in the blood rises above a certain level, the cow is said to suffer from ketosis. The liver is capable of processing small quantities of ketone bodies, but with larger quantities this processing capability fails and ketones pile up in the body. This stacking of ketones can be demonstrated in the blood, but also in milk and urine8,9,10. A subclinical form of ketosis is diagnosed at a plasma concentration of beta-hydroxy butyric acid (BHBA) > 1.20 mmol per Liter, the clinical form (with visible symptoms) coincides with BHBA levels from 2.0 mmol per Liter5,6,7.

Cows suffering from ketosis have low or no appetite, do not consume sufficient amounts of concentrate, and become slow or lethargic. The milk yield is lower than expected, the manure thickens, and the body condition score declines. Also, the cows are more susceptible to other health issues, like metritis (uterine inflammation), and displaced omasum. Severe cases of ketosis can be recognized by a typical smell of acetone in the exhaled air.

In the transition period, many processes occur simultaneously. It is known that 20 to 60% of the transition cows have a shortage of calcium and a negative energy balance. In the schedule below it can be seen which ‘cascade effects’ on the cow’s health may result from this (Figure 2)1. The main cause of the problems frequently lies directly after calving, when a low dry matter intake – leading to other problems – is often seen. The ultimate effect is substantial; the schedule shows the consequences of insufficient calcium supply and immune function after calving.