The development of the calf in the embryonic stage provides the basis for a longer productive lifespan. Also thereafter, during the two year rearing phase, crucial developmental stages clearly affect the productivity later in life. For example, providing high feeding levels in the preweaning period has a major effect on lifespan production. Table 1 shows the influence of high feeding levels in the milk phase. Especially the development of organs and udder tissue benefits from high feed intake.

Prenatal nutrition also affects the calf. It is important to provide the pregnant cow or heifer with adequate amounts of trace elements. In practice it is often seen that a trace element bolus or dry period bolus positively affects the cow and her calf. Benefits include:

Considering the importance of prenatal and neonatal stages for the development of the calf later in life, the question should be asked: Is it beneficial to outsource the rearing of youngstock? Should all replacement animals be acquired from outside? In the latter case, it is not known how the calf has been raised.

Investing in calf rearing more than pays off!!!!

Various models are available to calculate the rearing costs of heifers. An Irish study calculates rearing costs to amount to €1559,- (Mohd Nor et al, Irish Veterinary Journal (2015)), Wageningen UR indicates an amount of €1540,-, and JonKos calculates the average rearing costs of a heifer to be €1727,- (see Figure 1). The costs will vary between individual farms. In general, it can be said that rearing costs are often underestimated.

Remain critical on all costs, but do not pare down on feeding costs of your youngstock. Calves with high growth rates in the milk stage (metabolic programming) are better able to utilize their feed efficiently at a later stage, and have less tendency to deposit fat. A higher growth rate in early life enables the heifers to be inseminated at a younger age, and, therefore, to give birth to their first calf at a younger age. Investing in calf rearing more than pays off!! 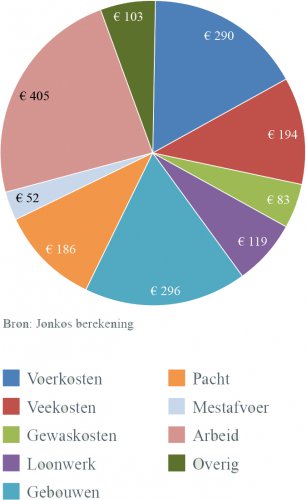